Dave Brubeck’s tunes and songs dotted the American musical landscape during the second half century of the 20th century and beyond. Brubeck [1920-2012] is perhaps best known as the leader of a “classic” Jazz quartet that performed in venues all over the world from 1956 -1968 and featured the talents of Paul Desmond on alto saxophone, Eugene Wright on bass and Joe Morello on drums.

Brubeck developed a unique, powerful style as a pianist with elements of rhythmic displacement and the use of sophisticated harmonies that were adopted by some of his contemporaries such as Bill Evans and Cecil Taylor, but perhaps his most lasting contribution to the genre of Jazz were his compositions.

Over his seventy year career, Brubeck wrote such a wide variety of music that it is impossible to categorize it, but two forms of his compositions have been widely adopted by subsequent generations of Jazz musicians: his ballads [slow, sentimental sounding music] and his tunes based on unusual time signatures [odd meters 5/4, 7/4, 9/8, etc.].

One could make the argument that Dave’s quartet reached the peak of its popularity with the recordings that introduced these unconventional time signatures - Time Out [Columbia CS 8192] in 1959 followed by Time Further Out [Columbia CS 8490] in 1961. But the group would issue many more high quality studio and in performance recordings in the 1960s with albums such as Jazz Impressions of Japan [1964], Angel Eyes [1965] and My Favorite Things [1966] falling into the first category and the double album of the 1963 Dave Brubeck Quartet highlighting the latter.

Of course, there are a slew of bootlegs made from radio broadcasts and portable tape devices which are the bane of a performing musicians’ existence both because they deprive them financially and denigrate their skills with atrocious audio quality.

I thought it might be fun to use this “undiscovered Brubeck” feature to bring a number of these lesser known recordings to your attention, especially since there are many examples of the music on them available on YouTube.

The first of these in the series is: 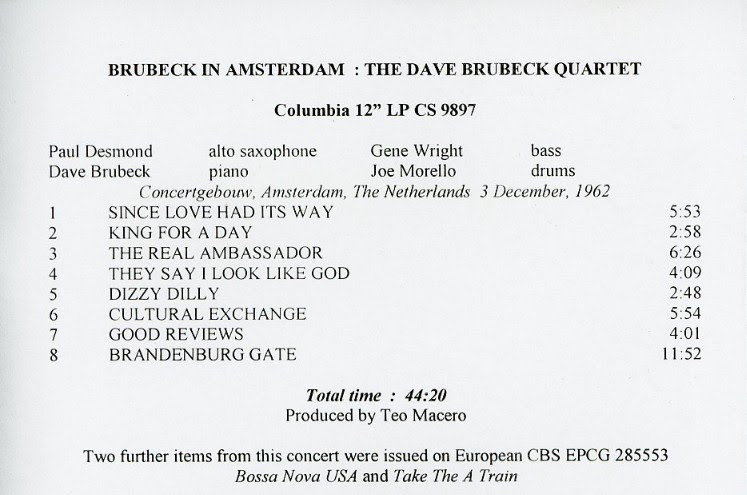 “The Quartet's concert in Amsterdam had gone down in my memory as a happy experience. I knew Columbia had recorded it, but the tapes had gone into the vaults and had subsequently been almost forgotten.  Paul would occasionally ask, "Whatever happened to the tapes of that good concert in Amsterdam?" We were recording so many albums in those days, it was hard to keep track.

When I recently rediscovered and played the tapes, the circumstances of the recording came back to me. Our original concert in Amsterdam had been cancelled, because Holland was in mourning after the death of Queen Wilhelmina. The only time our concert could be rescheduled while we were in Europe was to announce a midnight concert, beginning the moment the official mourning period ended. I was skeptical.

"Sunday midnight?" Who's going to come to a concert when he has to go to work early the next morning? Nobody will show up!"

The Dutch promoter assured me, "They'll come " And they did. I've always said that the audience was the fifth member of the Quartet - the unknown ingredient whose presence can tip the balance from just another concert to an experience that's unique. The tone of this particular audience at the Concertgebouw acted as a catalyst that caused each of us to react; and as we reacted, they responded, creating a spiraling effect of tension and release. I think the musical experience has meaning for more than just those of us who happened to be at the Concertgebouw past midnight   At least, that's why after being kept under wraps for almost six years, this album is now being released.”

“I'm not familiar with too many of the items in the Brubeck book, but this must be one of his most swinging and appealing sets. Nothing very exciting happens, but it's all happy and relaxed, and well recorded before an appreciative audience.

Everybody gets sizable solo bites at the apple; Wright is featured on King For A Day, Morello on Dizzy Ditty, and Dave plays They Say I Look Like God with the minimum of rhythmic support. Paul is his usual immaculate self, especially on Cultural Exchange and Brandenburg Gate; and the classical tinge on the latter really adds something to the music.

First in a series. To be continued.