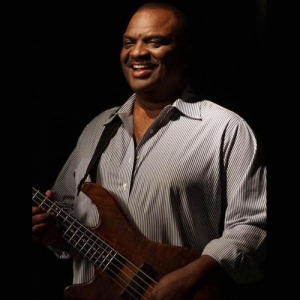 Tony Saunders’ life story could be the script to a hit movie.  Son of legendary keyboardist and composer Merl Saunders, Tony’s life has been a musical adventure.
As a child he was taught piano by Herbie Hancock, and for his tenth birthday he was given an electric organ from Sly Stone.

Growing up around his dad and the Fantasy Records family of artists,  he was constantly surrounded by music royalty, including famed record and film executive Saul Zaentz.  Tony’s passion for the bass guitar began when he started sitting in on recording sessions with musicians like Anthony Davis, who played with Walter Hawkins, and Lee Miles of Miles Davis fame.  “I got to see them both in the studio on a project my dad was producing.  These guys had a feel that drew me to the bass. "That’s all I wanted after seeing them play."

Tony graduated from the prestigious Conservatory of Music in San Francisco as a piano player,  but soon began honing his skills on the bass. He was influenced by the sounds of James Jamison,  Stanley Clark, Jack Cassidy and others.  Tom Fogarty of Creedence Clearwater Revival gave him his first bass guitar. Chuck Rainey and John Kahn both took an interest in Tony, giving him bass lessons and a legacy to live up to. By time he was  17 he was playing his first gig with Jerry Garcia and his dad in the Merl Saunders / Jerry Garcia Band.

Tony's musical journey has continued on from that era through to the present.  He has played and recorded with an astounding list of great musical talents, including Eric Clapton, David Crosby, Jo Sample, Chaka Khan, Ringo Star,  Bo Diddley, The Hawkins Family, and others too many to count. "This just touches the edge of who I have been blessed to play with", says Saunders.  Tony has played on hundreds of albums, won two Emmy Awards for soundtracks, and written award winning commercial jingles and movie scores.

Tony continues to record his own projects and produces for an impressive list of talent at his state of the art studio in Northern California.  Tony’s latest single "Uptown Jazz" climbed to number 5 on the Adult Contemporary Groove Jazz Charts.  It was released in September, 2015.  Tony's newest CD "Uptown Jazz" was released in March 2016.  His newest single, "Shaniya", was also released in March, 2016.  The song is named after his granddaughter Shaniya, who helped  him record the song.