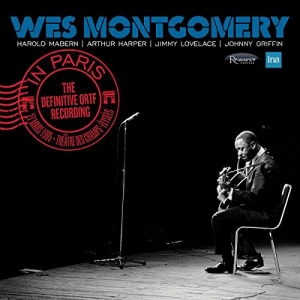 1965 was one of the peak periods of Wes Montgomery's career. A major and influential jazz guitarist since at least 1959, Montgomery (who turned 42 in '65) was growing in fame each month. That year he recorded the popular Bumpin' and Goin' Out Of My Head albums for Verve which greatly increased his commercial potential. On June 24 he recorded one of his greatest jazz sets, Smokin' At The Half Note with the Wynton Kelly Trio. And during March-May, he made his only visit to Europe.

Montgomery, who hated to fly, had a busy two months overseas. On Mar. 25 he appeared on the British television show Jazz 625. On Apr. 2 he was on the radio with a group that included Clark Terry. Two days later he appeared on television in Belgium and he was soon back in London performing at Ronnie Scott's during Apr. 5-9. On Apr. 30 Montgomery appeared on German television in an octet that featured four saxophonists (including Johnny Griffin and Ronnie Scott) and pianist Martial Solal. After again playing back at Ronnie Scott's in early May, he returned home.

The guitarist's Paris concert of Mar. 27, 1965 was only previously available on bootlegs. A pair of BYG Lps had eight of the ten selections while the other two songs were put out later on a CD by the France's Concert label. Producer Zev Feldman, who has worked with the Resonance label to release four previous Montgomery sets (mostly featuring previously unreleased music) decided that this concert was too important not to be released legitimately, with payments being made for the first time to the Montgomery family. The sound quality was greatly improved, a 32-page booklet filled with the story behind the concert and interviews (including with pianist Harold Mabern and guitarist Russell Malone) was compiled, and all of the existing music from the concert was released on an attractive two-CD set.

Montgomery is joined by his regular trio of the period (pianist Mabern, bassist Arthur Harper and drummer Jimmy Lovelace). The first disc consists of "Four On Six" (essentially an uptempo "Summertime" with a different melody), a rapid rendition of "Impressions" (somehow the guitarist sounds relaxed over the cooking tempo, even when playing his trademark octaves), ballad renditions of "The Girl Next Door" and "Here's That Rainy Day," and a fast "Jingles." While Harper and Lovelace are excellent in support, Mabern (the only member of the group who is still alive and active at this writing) provides fine solos, occasionally recalling McCoy Tyner but mostly playing in his own fresh hard bop style.

The second disc starts with a version of Mabern's somewhat obscure but worthy "To Wane" which was taken from a Wayne Shorter phrase. The great tenor-saxophonist Johnny Griffin makes the group a quintet on Montgomery's jazz waltz "Full House," "'Round Midnight," and a torrid rendition of "Blue 'N Boogie." Griffin sounds very much at home during these extended performances, adding additional heat to the music. The program ends with the quartet swinging through the longest piece of the date, "Twisted Blues"

All Wes Montgomery fans and those who love the bop-oriented guitar style in general are well advised to pick up this excellent release.